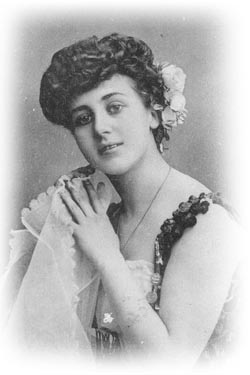 Lydia Kyasht was born at St. Petersburg, in (then) Imperial Russia, on March 25th, 1886. Her full birth name was Lydia Georgievna Kyaksht (she dropped the second ‘K’ from her name when she came to the west as it was too difficult for western Europeans to pronounce correctly). She was the daughter of George Kyaksht and his wife, Agaffia (nee Poubiloff) and sister of George (junior) – himself a celebrated ballet dancer and one-time dance partner of Mathilde Kschessinska.

Lydia was raised in St. Petersburg, one of the great centres of ballet in Russia, and received both her general education and initial ballet training at the School of the Imperial Theatres in that city, before progressing to the Russian Imperial Ballet School (again in St. Petersburg) where her contemporaries, although not all in the same year, included such names as Anna Pavlova, Tamara Karsavina, Lydia Lopokova, Adolf Bolm, Vaslav Nijinsky and many others destined to become famous as leading members of the world-renowned Diaghileff Company. During these years she received ballet instruction from her own brother, George; Pavel Andreyevich (aka ‘Paul’) Gerdt, Premier Danseur Noble of the Imperial Ballet; top Italian ballet master Enrico Ceccetti; and leading ballet mistresses Madames Sokoloff and Joganson. Her closest friend during these happy training years was Tamara Karsavina – a friendship which continued long after their professional careers had parted ways.

On the completion of her training, Lydia joined the Maryinsky ballet (still in St. Petersburg) and made her first named appearance on stage at the Opera House, St. Petersburg, dancing a pas de deux in “The Magic Flute” on March 22nd, 1902. She remained with the Maryinsky for the next few years, rising to the level of premiere danseuse, and usually dancing there for about eight months of the year. In between times, she danced at the Casino in Monte Carlo and the Opera Houses in Berlin and Vienna, as well as appearing in several other European cities. In 1907 she married Captain Alexis Ragozin, a serving officer in the Russian Life Guards.

In the summer of 1908, Lydia was approached by Mr. Montague Vivian Levaux, a theatrical agent who had come to St. Petersburg in search of dancing talent. Lydia was then earning around £80.00 a year with the Maryinsky, and when levaux offered her a four-week contract (with an option to extend if she made a success) to dance at the Empire in London for £40.00 a week she readily accepted. Coming to London in August 1908, she made a great success partnered with former Imperial Ballet classmate Adolf Bolm and achieved such instant popularity that when Adeline Genee departed for a tour of America later that year Lydia succeeded her as prima ballerina at the Empire – a position she held until December 1913 on a final salary of £55.00 a week. In that period she danced the principal roles in many of the elaborate ballets from which this theatre made its name; Swanilda in Coppelia, Sylvia in Sylvia, the Fairy Queen in Titania and several others. She was the first of the great Russian dancers to thrill ballet-lovers in London, two years before the arrival of Anna Pavalova and three before Diagilev’s Ballets Russes.

Gladys Davidson, in her ‘Ballet Biographies,’ says that the Empire audiences adored her “not only for her exquisite dancing of the wonderfully finished Russian style not seen in this country before but also because of her handsome statuesque appearance, her dark beauty, and her natural grace.” Upon leaving the Empire, she followed in Genee’s footsteps conducting a successful tour of the USA, and danced in New York for the first time. On her return to London here services were much sought after and she danced at the Coloseum, the Winter Garden Theatre and several others.

When war broke out, Captain Ragosin, who had resigned his commission to travel with Lydia, returned to their homeland to serve in its hour of need. He was there during the Bolshevik revolution and barely escaped the country with his life. Returning to England he won a temporary special commission in the British Army and subsequently served a long term in the Metropolitan Police.

After the war, Lydia, for a time, became a member of the Diaghilev Russian Ballet at the Alhambra. During 1924 she toured with “The 7:30 Cabaret” before branching out and producing her own entertainments. The first of these was “A la Russe” which she produced and toured within 1925 and 1926. She then formed a company named Cabaret Entertainment Gala Nights which she toured with the next three years.

In 1929 she published her reminiscences under the title of “Romantic Recollections” and over the new few years, her performances became fewer until she retired from dancing in 1935 and founded the Lydia Kyasht Dancing Academy. The school flourished well and several subsequently famous British dancers studied there. In 1939 she formed a new company of youthful dancers known as the Lydia Kyasht Ballet de la Juenesse Anglaise which performed to some acclaim at the Cambridge Theatre. The following year she formed a more mature troupe, the Lydia Kyasht Russian Ballet which gave successful seasons at the Palace Theatre, Hammersmith, the Whitehall Theatre, and the Winter Garden Theatre as well as touring the provinces. The company gave several new ballets, including “Ballerina” and “Heraldic”, both of which included choreography by her daughter – Lydia Kyasht Junior.

In 1946, Lydia founded a second ballet school at Cirencester (the Cirencester Ballet Club) and subsequently taught at the Legat school of dance.

Cirencester Dance Club are following the government guidelines so we are offering online dance classes for our Summer term.  We understand how important dance is to everyone’s physical and mental wellbeing.  We are offering a number of packages that will suit everyone as we are aware that this current situation has affected many people financially and emotionally.   We also have extended our bursary offering so please get in touch to discuss all options available – to us the communities wellbeing is the most important thing.